Because we needed another athlete's opinion on the issue

The Viking's Adrian Peterson is no fan of gay marriage 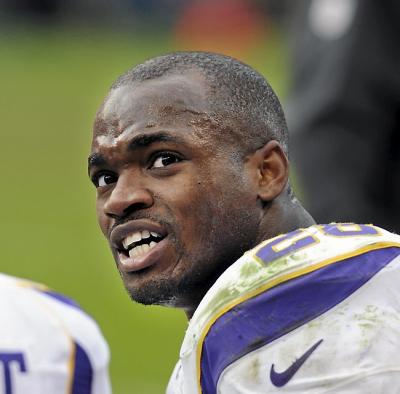 With Chris Kluwe's departure to Oakland, it seems like eons since any of the Minnesota Vikings have weighed in with their views on the hot button issue of gay marriage.

The NFL MVP said "I'm not with that" when the conversation turned to same-sex marriage during a Thursday interview on Sirius/XM NFL satellite radio.

The star running back was asked by hosts Bruce Murray and Amani Toomer whether he thought the Vikings cut their longtime punter because of his vocal support of gay marriage. And as he so often does with tacklers, he took the issue head on.

"To each his own. I'm not with it," Peterson said. "But I have relatives that, you know, are gay (trust me, they don't like you). I'm not biased towards them. I still treat them the same. I love them. But again, I'm not with that. That's not something that I believe in. But to each his own."

Peterson said he saw no ulterior motives in the release of Kluwe.

"I'm sure the Vikings' organization did not release him based on that," Peterson said. "They know Kluwe. They've been knowing him for a long time. They know he's outspoken."

The punter occasionally known as Chris Warcraft is now an Oakland Raider, and Peterson will miss him.

"It hurt me to see him leave. He was a good friend of mine and a really cool guy, man," Peterson said. "Probably one of the smartest guys I've ever been around, man. ... Different (have something you want to share with the class?)."

radio, here are some other highlights from the All Day interview:

-- Peterson apparently has tired of the 2,500-yard talk and is looking for more. "I'm just setting that bar right there for now and then, you know, here in the future I can go ahead and put up thirty-five (hundred). How about that?"

-- Peterson said "I don't know" when asked what Christian Ponder has to do for the Vikings to take the next step this season. "I don't feel right to sit here and point out (Ponder's) flaws when there are things I need to improve on, as well." (Though Peterson's self-improvement list likely is significantly shorter than Ponder's).

-- The former Oklahoma Sooner said "his heart was thumping" when he heard about the devastating tornado that hit suburban Oklahoma City on Monday, and he's planning to make a contribution to Moore victims through his All Day Foundation.